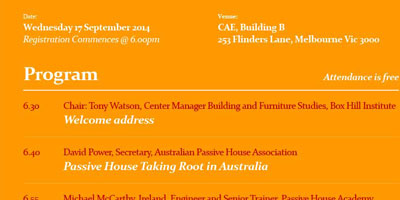 An exciting event on 17 September 2014 represents the collision, or perhaps converging, of several worlds which have never met before.

This standard – the standard of design which leads to a certified passive house, has not yet found its way to Australia’s so–called sunny shores (well we do get cold here too, albeit not as cold as Eastern Europe!).

The world of Superpod® enters too, a company dedicated to passive house design and building what will be a certified passive house in Wonthaggi Victoria – a small but busy country town some 90 minutes from Melbourne.

The Superpod® design is innovative, with a patent pending, and will be a world first for the passive house standard. A fast site-built flat pack passive house system made in a few weeks out of steel – ready for international rollout in a range of applications from residential to remote, from urban to rural, from single dwelling to high rise.

As another first, Superpod® meets on our own home soil a rep from Ireland who is consulting to Superpod® as well. The Founding Director of Superpod®, Fiona McKenzie, already met Tomás O’Leary and Bob Ryan in New York City in June, at a Passive House High Rise Conference. And it feels as though the mantle is about to be passed on – Tomás built the first certified passive house in the English speaking world – in Ireland – around 10 years ago. And now he is about to pass on the passive house standard to Superpod® – from Ireland to Australia.

And then from Australia to the world – as word of our innovative design gets out.

Last but not least, the building world in Australia is represented by Box Hill Institute, who invited the Passive House Academy to Australia. Box Hill have shown real leadership in this space, by reaching out to the world’s best energy efficiency standard, and supporting this tremendously important visit.

The world looks towards a more energy efficient future. We need everyone to be on board. Climb on!